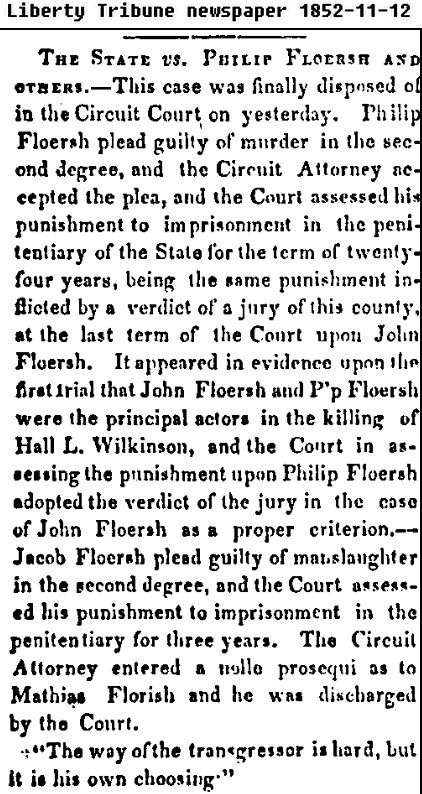 The State vs. Philip Floersh and others – This case was finally disposed of in the Circuit Court on yesterday. Philip Floersh plead guilty of murder in the second degree, and the Circuit Attorney accepted the plea, and the Court assessed his punishment to imprisonment in the penitentiary of the State for the term of twenty-four years, being the same punishment inflicted by a verdict of a jury of this county, at the last term of the Court upon John Floersh. It appeared in evidence upon the first trial that John Floersh and P’p Floersh were the principal actors in the killing of Hall L Wilkinson, and the Court in assessing the punishment upon Philip Floersh adopted the verdict of the jury in the case of John Floersh as a proper criterion.

Jacob Floersh plead guilty of manslaughter in the second degree, and the Court assessed his punishment to imprisonment in the penitentiary for three years. The Circuit Attorney entered a Nolle Prosequi as to Mathias Florish and he was discharged by the Court.

“The way of the transgressor is hard, but it is his own choosing.”