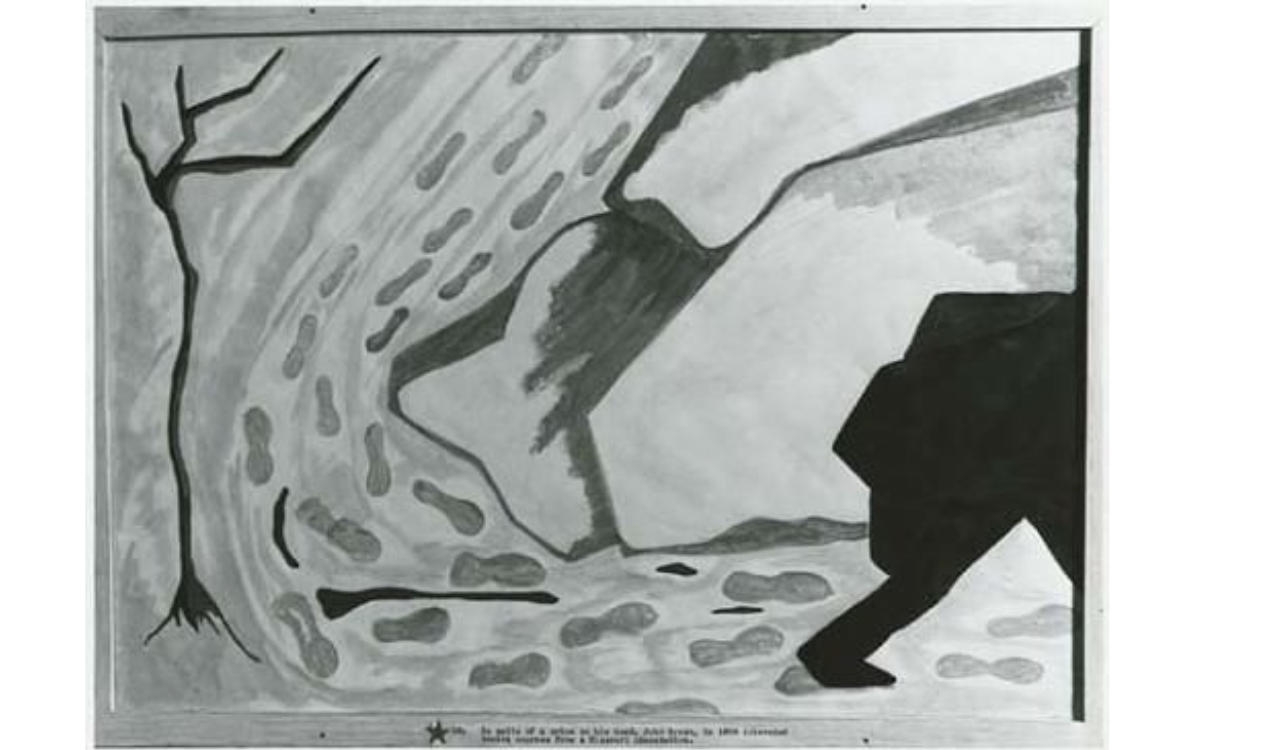 Photo: The Life of John Brown, no. 16: In Spite of a Price on His Head, John Brown, in 1859, Liberated 12 Negroes From a Missouri Plantation [painting] / (photographed by Peter A. Juley & Son). See Civil War on the Western Border, The missouri-kansas conflict 1854-1865

From the Kansas Magazine

Some time in the summer of 1850, John Brown was conducting a band of fugitives from Missouri, through Kansas and Nebraska, into Iowa, intending to reach Canada by the Chicago and Detroit road. By some means, not now recollected, the information was conveyed to the city of Atchison that Brown and his escort were encamped on a small tributary of the Grasshopper river, in Jackson county, about 20 miles from Atchison. The proslavery Democrats thought this a favorable opportunity to strike a blow for the party, capture the man whose influence, courage and military genius had created a panic throughout Missouri, recover the fugitive property and teach the universal Yankee nation down east a lesson that was sadly needed, and getting more important every day.

An impromptu meeting was held rather quietly, and about a dozen young braves who were known to be “sound on the goose,” and who were always “ready for a fight or a foot race,” were selected to make a raid on John Brown, capture him and his negroes, and convey them back to Missouri.

Horses and revolvers were furnished by those who instigated the movement, and these redoubtable warriors marched forth “in all the pomp and circumstance of glorious war.” The noble bearing of these gallant knights, the curveting of their fiery steeds, the tinkling of the little bells on their heels, were all calculated to inspire pride and hope in the bosoms of the friends who had sent them forth on this expedition.

The old proverb, that “you can’t catch a weasel asleep,” was verified in this instance. Brown was apprised of their approach, and was ready to receive this warlike demonstration. The assailants had made a reconnaissance of Brown’s camp, and thereupon had resolved to attack with both cavalry and infantry, so a number had dismounted and fastened their horses to contiguous saplings, just inside of Brown’s pickets. The cavalry were to move forward and attack the tent and wagons, where it was supposed, as no one was seen around the camp, the game was asleep, capture all they could, while the infantry stood ready to shoot down any fugitives who might endeavor to escape. “Forward!” shouted the leader of the horse, and a slight movement forward was made. “Halt!” said Brown’s men, as they arose from the bush where they had been concealed, and closing in upon their assailants, shouted aloud, “Dismount and throw down your arms or you will be shot down in a moment,” This sudden and unexpected change in the programme seemed for a moment to bewilder the assailants, and to throw them into a panic, for the order to ground their arms was instantly obeyed by the infantry, when the cavalry realizing the condition of things, began to think, like Falstaff, “discretion was the better part of valor,” and, applying their spurs energetically to their steeds, turned and fled ingloriously, leaving their friends to get out of the scrape as best they could. These latter were, all but one, taken prisoners by Brown’s party. This one, seeing the black soldiers about to surround him, and finding that he was in peril of being deserted by his friends, made a spring at the extremity of one of the flying horses and actually seized the appendage aforesaid, and there he clung like Tom O’Shanter’s witch, and so escaped. Soon after this disastrous and bloodless defeat of the assaulting party, Brown, securing his prisoners, struck his tents and moved into Nebraska, carrying his prisoners with him. Here a council of war was held, and some of the party were for shooting or hanging the prisoners, but Brown, whose philanthropic feelings would not permit him to shed human blood, prevailed on his comrades to spare their lives, remarking that, although they were scarcely fit to live, they were not fit to die, and to spare their lives would give them time to repent hereafter.

One of the party was a young physician from Atchison, a wild, rattling, devil-may-care kind of a fellow, always ready for an adventure that promised either excitement or sport, but who really had nothing very bad in his composition. Brown took him under his special care. As has been hinted heretofore. Brown was of a religious turn, and, whether at home or encamped on the wide prairie, had always an altar erected in his house or tent, at which it was required that all present must engage in worship. One evening when about to retire he called upon the doctor to offer up a prayer.

“By G—,” said the doctor, in language more profane than polite, “I can’t pray.”

“Did your mother never teach you to pray?” inquired Brown.

“Did your mother never teach you to pray?” inquired Brown.

“But you still remember the prayer she taught you?” said Brown.

“Well, then, in absence of any better one, say that,” said Brown.

And the doctor actually repeated before black and white of the camp that night, the very familiar nursery invocation of “Now I lay me down to sleep,” etc., to the great amusement of his fellow prisoners and all others present.

On his return home he related all the circumstances, and many others of an interesting nature now forgotten. He stated in his usual strong language that John Brown was the best man that he had ever known, and knew more about religion than any one he had ever seen. When asked if Brown had ever used him badly or used any harsh language toward them while they were with him, he said “No;” that they were all treated like gentlemen; had the same fare as the others, “but it did go a little hard and against the grain to eat with and be guarded by the d——d niggers.”

After detaining his prisoners for several days, during which he taught them some lessons in morals, he was about to send them home on foot and claim their horses as articles contraband of war, but on the fact being made known that the animals upon which they had ridden were not their own, but belonged to other parties in Atchison, Brown gave them their horses and dismissed them with the sage admonition that they should never undertake to do anything until they first learned how to do it, and never try to perform an action without calculating the exact amount of opposition to be overcome.

Intended Path by John Brown: Fugitives from Missouri, through Kansas and Nebraska, into Iowa, intending to reach Canada by the Chicago and Detroit road

The path taken is just 40 miles outside of Weston. Vocal abolitionists were known to be in town since February, 1850. See Frederick Starr.